I’m currently editor of The Antarctic Sun, the United States Antarctic Program’s online newspaper. I write and edit stories about the amazing research that takes place at the bottom of the world as well as the logistics and operations that make the science happen. I also manage USAP’s photo library, produce the Sun’s podcast, and help with general communications activities for the program.

Before joining USAP, I was a program manager in the media relations department at the American Geophysical Union, the world’s largest organization of Earth and space scientists. I shared new Earth and space science research findings with journalists and the public through press releases, blogs, news stories and video projects. I also helped found and produce AGU’s award-winning podcast Third Pod from the Sun, which tells the stories of the people and methods behind the science.

I earned my bachelor’s and master’s degrees in biomedical engineering from Tulane University and then worked for more than five years at Memorial Sloan-Kettering Cancer Center in New York, where I studied the immune response to infectious diseases. I also helped establish a new lab devoted to studying the role of microbes and inflammation in cancer.

I am a past president and board member of the D.C. Science Writers Association.

I write to share with others what I find beautiful about the world. My goal is to inspire in others a sense of awe of our vast universe, from the tiniest amoeba to the grandest galaxy.

I love laughing, and I wish it made me float on the ceiling like Uncle Albert in Mary Poppins. I could listen to Maxwell’s “Silently” every day for the rest of my life and never get sick of it. If I were on death row, I would want my last meal to be 1,000 mozzarella sticks. I think the most beautiful thing ever written that is not a poem is Joyas Voladoras by Brian Doyle. I think the most beautiful thing ever written that is a poem is I carry your heart with me by E.E. Cummings. I feel incredibly vulnerable when I leave the house without a hair tie on my wrist or chapstick in my bag. I believe that no day is so bad that it can’t be fixed by a nap. I think all the best people are a little bit bonkers. And I think Bob Marley had it all figured out—don’t gain the world and lose your soul; wisdom is better than silver and gold. 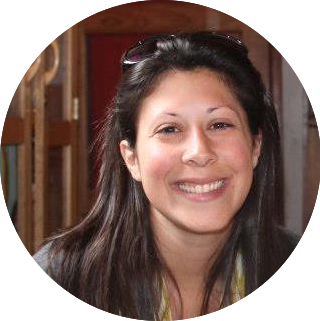